Don’t buy into the stereotype or the wrong information — not every destination only hires ESL teachers that are from native English speaking countries, nor do they always require that you’re a recent-college grad, bright eyed and bushy tailed, making headway into your first job out of uni.

Take Monique, for instance. This French woman is KILLIN’ IT in our paid teach abroad internship program in Cambodia. She’s also a mid-career professional. Read on to learn more about her story!

Cambodia is just awesome. What made you choose here instead of other Premier TEFL English teaching locations?

Teaching abroad is, for me, a way to discover a country where I have never been before. I am not a good tourist at all, I don’t find sightseeing every site from the traveler’s guidebook very satisfying and I do relatively little on that side. Neither do I prepare myself by reading and researching before traveling.

I like to be surprised and enjoy the spontaneity of the first impressions instead. As I have never been in Cambodia before, the ad immediately attracted me and I didn’t look further! 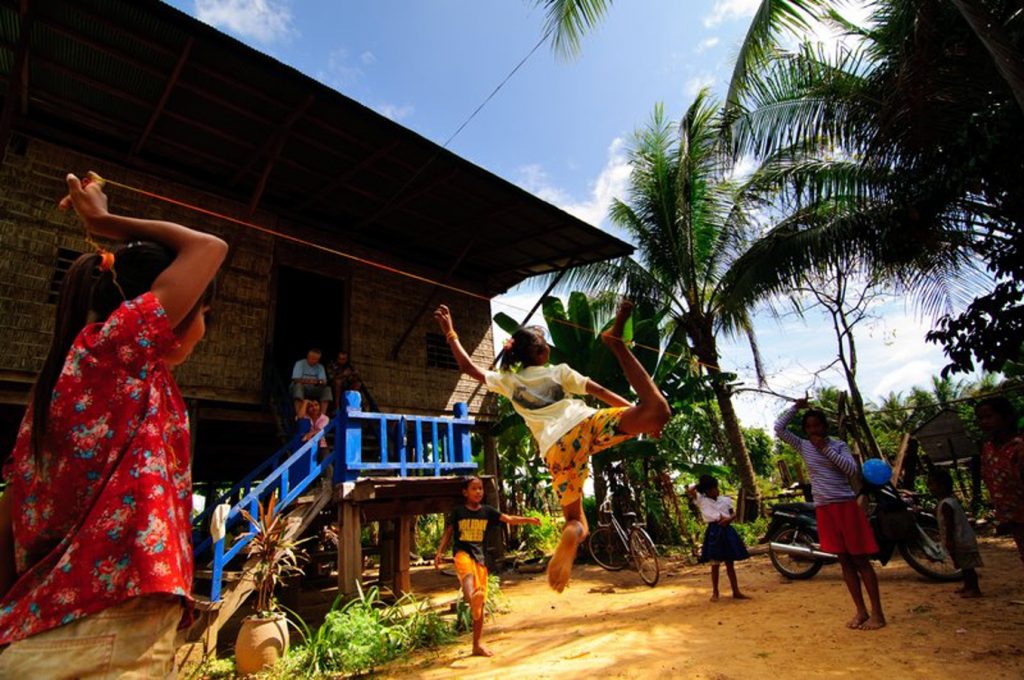 Describe your first days after you arrived in Cambodia to begin teaching abroad.

Premier TEFL in Cambodia has been fabulous and left nothing unattended. I arrived in Phnom Penh on Sunday afternoon and Sambo picked me up from the airport, took me to a shop to buy a sim card (one of the essentials these days and even more so in Cambodia), drove past the school and brought me to the apartment that is provided.

It is well located, less than 10 minutes from the school on foot in the quickly developing residential district of Phnom Penh, North of the city center and equipped with a washing machine and a fridge which amounts to luxury here.

On the following day, Sambo picked me up again for a tour of the city by tuk-tuk and I got a first flavour of the traffic in Phnom Penh: quite hilarious and hard to put it in words! Crossing a road as a pedestrian, you practically need additional eyes above your ears to screen the street fast enough and accurately; however, after a couple of courageous trials, you realize that they are not really aggressive drivers. 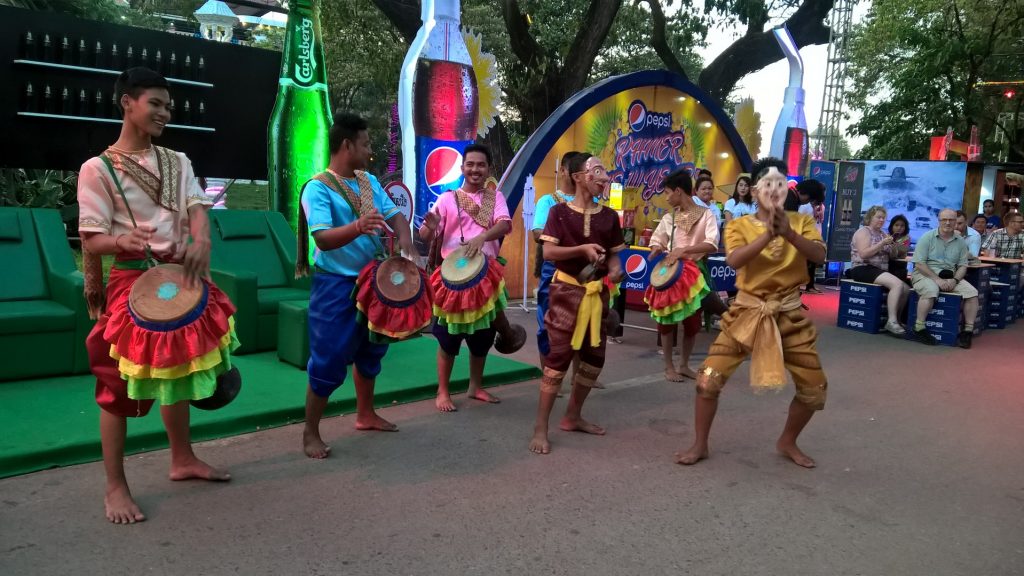 In fact, I almost feel sorry for the car drivers as they are constantly blocked by the tricky bikes and tuk-tuks and can hardly move forward! The hordes of motorbikes are actually more daunting, with their shortcuts and stretches against the traffic and invasion of the pavements – or what you would logically identify as such. Although I was offered a bicycle, my first thought was to stick to the tuk-tuk.

After the tour, we went back to the school, bustling with the last preparations before the opening and I had an introduction on Khmer culture and the do’s-and-don’ts. 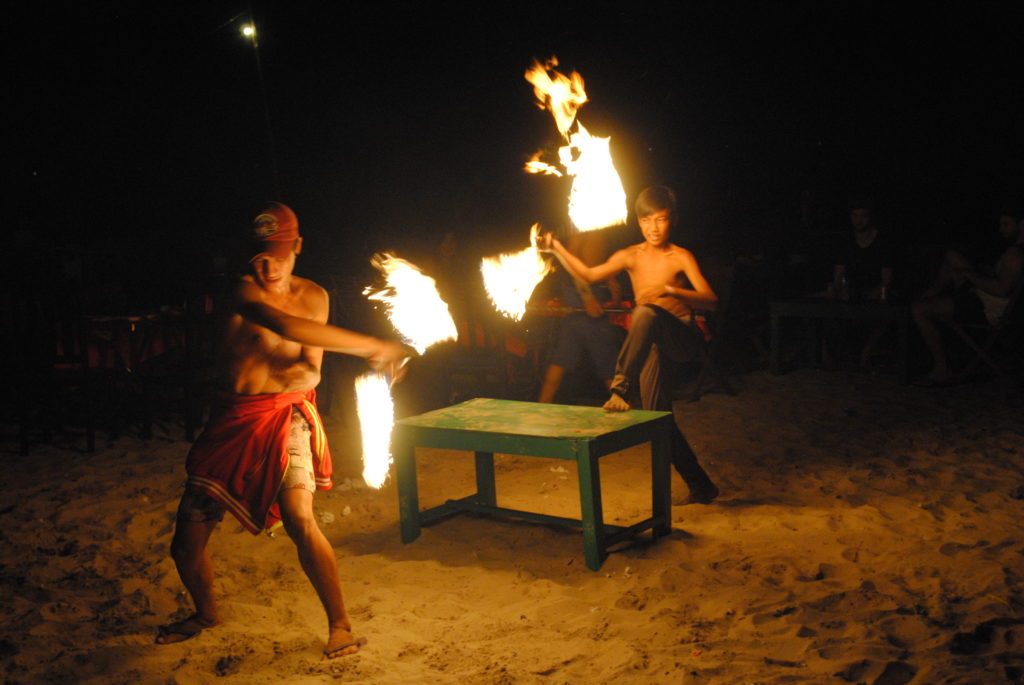 I spent Wednesday morning with David, who’s in charge of the educational program and got my schedule: three classes of 90 minutes with three levels, scheduled between 12:30 and 6:45 pm.

David has planned 10 workshops on various topics to accompany me in the teaching and I got the first ones before starting classes. Moreover, he has been providing me with so much information and documentation and is always there for any questions.

With his long teaching experience, David is a mine of knowledge and I am privileged to have all this on a one-to-one basis! 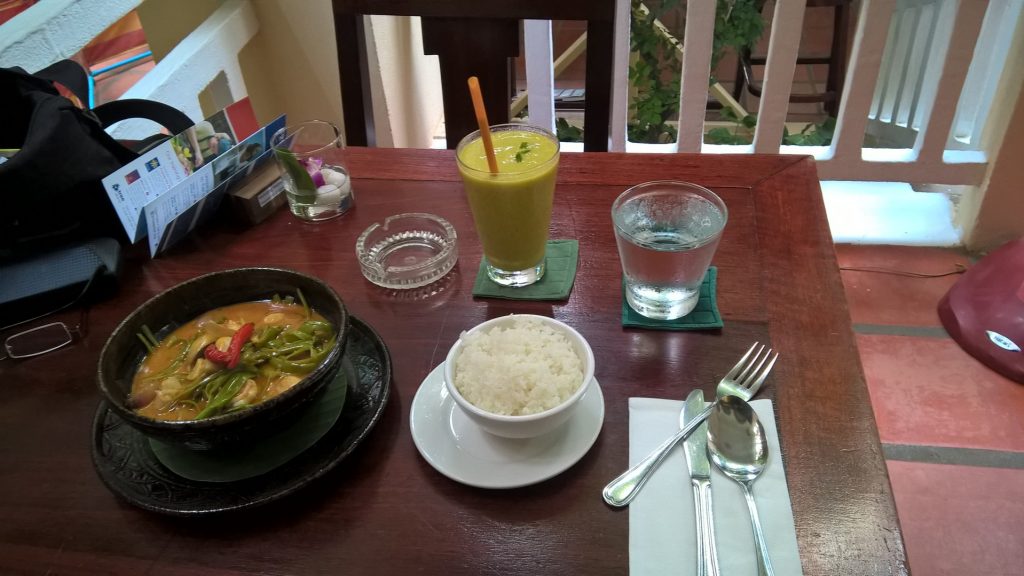 What kinds of fun are you planning to have when you’re not in the classroom?

I arrived shortly before Khmer New Year and Bun-Thari, which I spent in Siem Reap (that’s the place to be in for all Cambodians if they don’t go to their native province while Phnom Penh is empty – or at least very quiet at any rate with most outlets closed).

I went there by mini-van, the most popular mean of transport across the country, for a very modest $20 compared to the $180 airfare (the equivalent of a month salary for many here).

A smooth drive of six hours, it took a bit longer than scheduled because the driver kindly helped another van driver – obviously not from his company – who was stuck with a failing battery at our halfway stop. 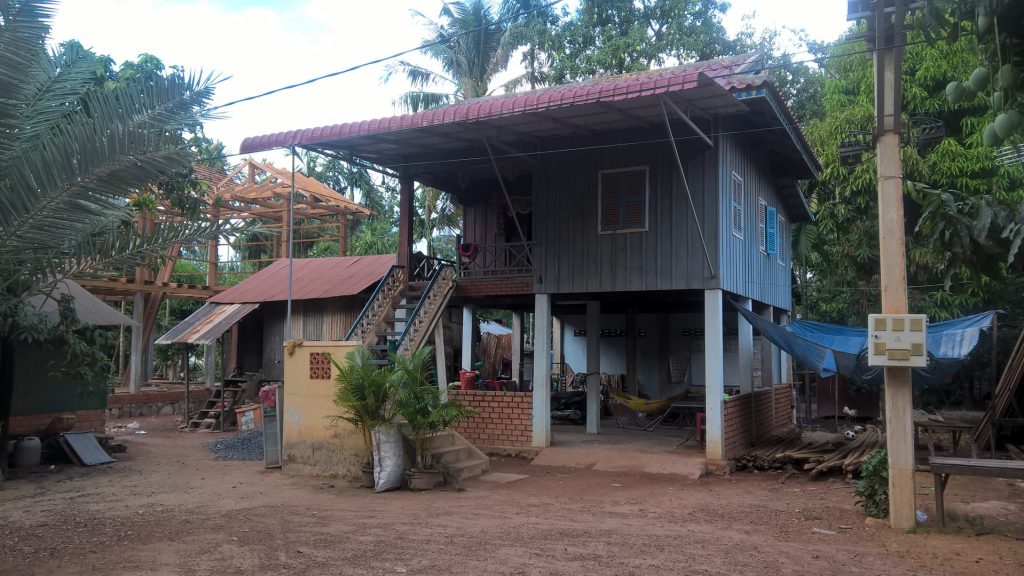 This is Cambodia, flexible and genuinely kind.

Since class started, I reckon that I do not have much free time during the week — preparing my classes is my priority and it takes me a lot of time although with weeks passing, I’m getting a bit better. I make up for all the work on the weekends.

On the first Saturday after returning from Siem Reap, Sambo had a bicycle delivered for me at the apartment. I didn’t want to disappoint them by saying that I didn’t touch it and found myself pushed to give it a try. After planning carefully a route to the City Center, there I went.

I can’t say it was the most relaxing ride, but I came back in one piece and felt it was a great success! Meanwhile, I love my bike and I go everywhere on it — it is so convenient, I can stop whenever and wherever I want. 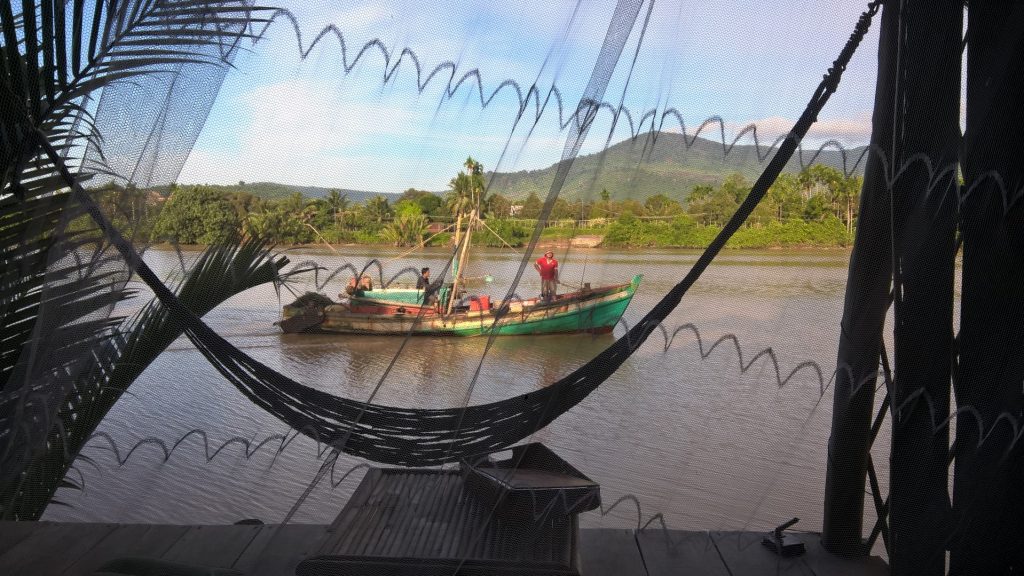 Tell us about your career before you took the leap to teach abroad.

Let’s say that I started my “real” career very late after having studied in France and in Germany. I then spent another 10 years travelling in Taiwan and Japan, where I got local jobs while learning these countries’ languages.

Coming back to Europe, I was lucky to be able to start a career as an IT consultant. This industry was booming at the time and it was easy for anybody with some education to get a start. It was the perfect job for me and I did it passionately.

I spent the next 20 years working on international projects, from China to Africa, Latin America and also European countries.

It has been a demanding job, with long working hours and living conditions not always matching the standard views on “expat life” in certain countries, such as China or Mauritania; however, what remains of it in my memories is fore-mostly the rich and invaluable experience of working for and with people from diverse cultural backgrounds. More than just a work, it has been a lifestyle. 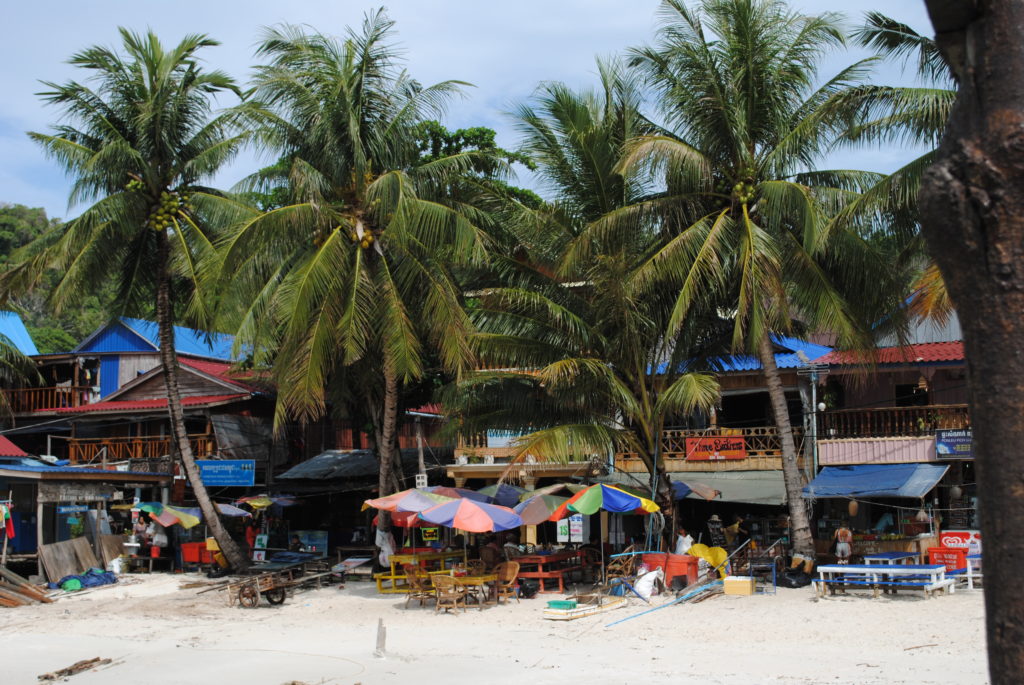 You’re a very experienced professional. What made you decide to step away from work and teach abroad?

At 61, I decided to start last year with a longer break which eventually led me to the decision to step away from my career and even to retire.

After a very active life, this is not an easy step and easy decision to take and in fact it’s only after having found TEFL that it became a deal in my mind. I could not face the idea of retirement as a little homely routine.

TEFL has given me the chance to fill it with great and meaningful experiences and to get some insights on different countries and cultures. 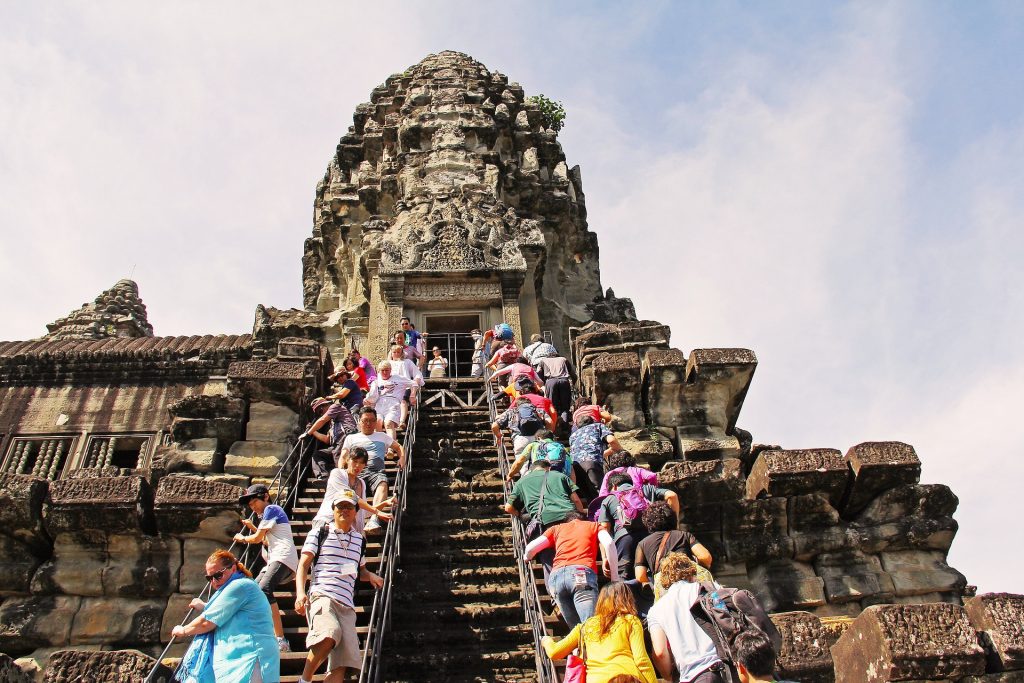 What insights would you like to share with other potential mid-career or late-career ESL teachers aged who are considering teaching abroad?

Whether as mid-career break or as retirement, I believe that the timing is not the essential aspect to it (I also made a big move when I was 40 and started from scratch so to say). The appetite for a change and new experiences, the curiosity for different ways of life seem to me the most important.

As Europeans, perhaps more than in other regions of the world, we are so much oriented towards developing early on a plan of life and career and driven by security (more than ever “alleged security”) that we end up being trapped in career and limited horizons, missing the most exciting opportunities that life offers and there are plenty.

Teaching English abroad is a great one and flexible in terms of where and for how long while providing a reliable frame for anyone who would not dare to jump on its own. It’s hard for me to imagine that someone could be disappointed by it, but should it be the worst of luck occur, one certain thing is that upon returning — one will definitely appreciate in a new light all that which had been taken for granted before. Thus it’s a win-win case! 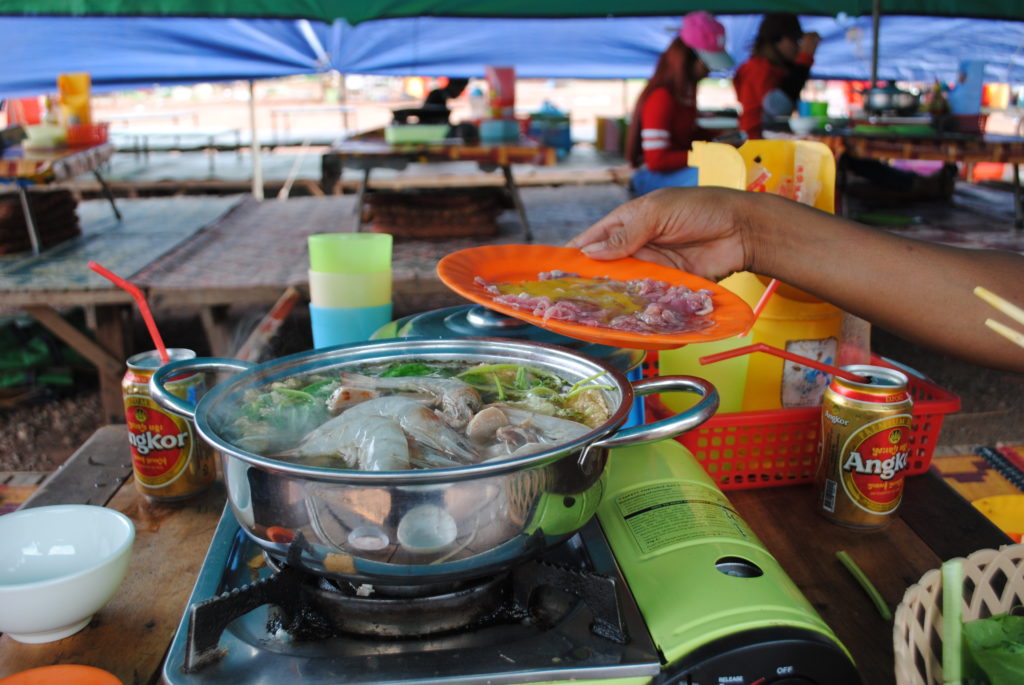 At an early point in my previous career, at a stage where everyone gets nervous before the upcoming face to face with a demanding client, a senior colleague told me: “do you know what makes an expert?…” and gave me the clue: “5% more knowledge than his counterpart!…”.

It gave me the confidence I needed at that point. As non-native English speakers, we can’t pretend to know it all, but we can definitely teach students what they need. More practically, the preparation of the lessons is also key to reach confidence.

Personally, it took me quite some time at start and I felt that I was completely lacking imagination. But this improved by the day: teaching is very stimulating and creative and a learning process for the teacher as well.

Thanks  for your wisdom! Best of luck in your new role and future ed-deavours. ? ? ?‍?

Were you as inspired as we were by Monique’s amazing story? Why not download our free guide to Cambodia and start planning your next adventure!

Live Webinar: Do You Want to Open Your Own Online English Teaching Company?